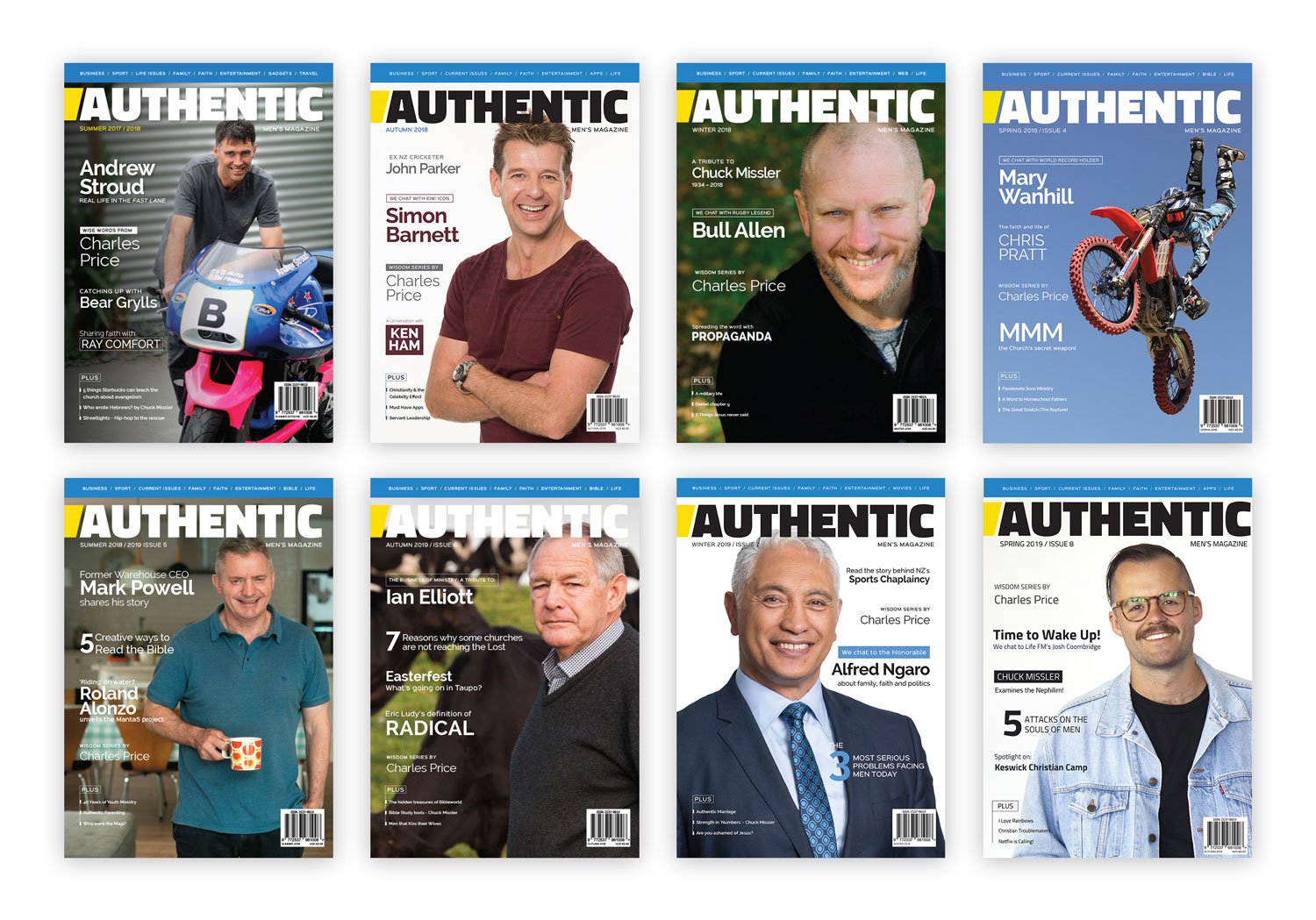 Our prayer is that this magazine is a source of encouragement to Christian men. We want to help men grow in their faith, knowledge and understanding of Jesus Christ but also we hope that it can be a light to those living without Jesus.

For each new issue we strive to fill Authentic Magazine with great 'man stuff' - challenging, encouraging and insightful articles that help men dig deep to rediscover the life God intended us to lead, great features that help us relate to other people and their individual faith journeys, and useful tips and information to help us on our own walk with the Lord.

A Christian Men's Magazine? Seriously? Who would do that?

Well, some people thought we we're crazy but it was a simple step of faith and a well placed trust in a limitless God!

It all started ten years ago when I (Dave) had the privilege of helping my good buddy, Steve Legg, launch ‘Sorted’ the UK’s only Christian men’s magazine. I moved to New Zealand the following year but Steve and I kept in touch about different things and we even talked about launching a men’s magazine out here.

Well, since then life got busy so the idea just sat on the back burner, until about four years ago, when through a strange series of meetings with different people the idea suddenly started getting traction again.

I’d mention the idea to Christian leaders here in NZ and they’d say things like, “That’s a great idea - how can we help?” It finally got to the point where I'd had serious conversations about it with 20+ people and they started to ask me, “So, when’s the men’s magazine happening, Dave?”

One of those people was my buddy Lee Hanson. Lee had directed a design agency for 10 years and we had completed many projects together. We spent many hours thinking, praying, planning, laughing (at the thought of doing this) and crying (at the thought of doing this). We both had full plates with work and ministry responsibilities so it was hard to see how this was ever going to happen...

When you feel like there isn’t enough time in each hour - let alone day, week or month - you could argue that it’s a bad idea to even entertain the thought of launching a Christian men’s magazine, but that’s where the importance of ‘surrender’ comes in.

Christ, not busyness, is Life (John 14:6). So it was as simple as ‘surrendering’ it all to Him and that’s when it got exciting. Ideas, people, photographers, writers, funding, partnerships, advertising - all started flowing...

We just sat back and watched. God is good - all the time. It’s just that sometimes we are so busy doing things FOR God we forget what He promised: ‘the one who calls you is faithful and HE will do it.’ (1 Thessalonians 5:24)

Everyone involved in this project is busy! But busy is a misused word. We always seem to have time for the things that are important, so when God calls you to do something He never does it without giving you all the time, resources and energy you need to do it. The problem is often we take on things that we shouldn’t so we feel like we don’t have capacity for the things of God!

Being Authentic is a calling - and we’re taking it seriously! Trusting in Christ no matter what. Not pretending, not conforming, not fearing, not running. Trusting Him to be who He says He is.

We also feel that Authentic Magazine is a calling too, a quarterly men's magazine that is just about to reach it's two year mark. Praise God for the issues completed and those still to come. We recognise that everything belongs to Him (Psalm 24:1). We know that. We are simply stewards, but we’re thrilled to be part of what He is doing.

Support us via Prayer